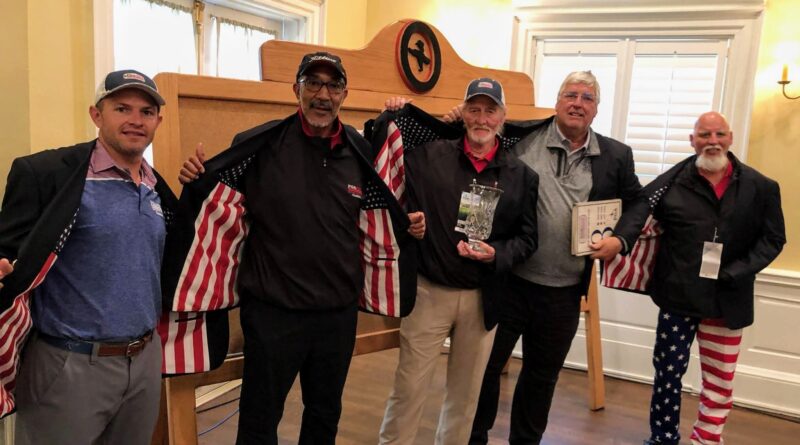 You never know when you have the opportunity to save someone’s life. Five years ago, I was eating lunch in Italian Bistro in Summerville when my waitress overheard me speaking to a Veteran about the PGA HOPE program. She told me that her husband, a retired Marine, could really benefit from the program. Milissa Burge told me that she had gone back to work because her husband had lost his job and was in recovery from opiates. A few days later, Bill was attending a mandatory aftercare program at the VA following 37 days of inpatient rehab. While at the VA he met Roland Caramagno, one of the Veterans in the PGA HOPE program, and they started a conversation about the program.

That afternoon, Bill “Gunny” Burge gave me a call about joining PGA HOPE. He told me he was born and raised in Summerville and participated in most all sports through high school playing baseball and basketball at Summerville High School. He even had an offer to play “ball” for Coach Bill Bustle at the Baptist College.

Following graduation, however, Bill chose instead to enlist in the United States Marine Corps and headed off to basic training at Parris Island. After boot camp, infantry training, and aircrew school, Bill was sent to HQMC Flight Section at Andrews Air Force Base where he met his wife. He would go on to serve 21 years. Following his military service, the couple returned to Summerville to raise their five children. Bill and Milissa recently celebrated their 41st Anniversary and have 7 grandchildren with one more on the way.

While on active-duty, Bill had two cervical spine surgeries which led to chronic pain and dependence on Opiates. Prior to finding PGA HOPE, he had lost interest in golf for 12 years due to the pain and depression.

Bill found PGA HOPE Wescott in the fall of 2016 and since then his life has changed for the better in so many ways. PGA HOPE clinics rekindled his love of golf. Fred Gutierrez has become a brother and mentor and their friendship has been critical for his recovery. Fred also helped lead him back to Christ. It didn’t take long before Bill was ready to take the next step and serve as a peer mentor himself. For those battling addiction, mentoring others is an extremely important step in the recovery process.

Last year, Perry Green asked him to become the lead peer mentor for Wescott. According to Bill, “The assignment helped give me a purpose and reason to get up EVERY morning. I am also currently the USMC Rep for the Advisory Committee for PGA HOPE Charleston. While on the Advisory Committee, I wrote the Veteran’s Code of Conduct and co-authored the Peer Mentor Training Syllabus.” Bill also took on the responsibility of organizing a weekly golf outing for the Veterans throughout the year.

This past March, “Coach Perry” asked Bill to serve as a volunteer assistant coach for his youth golf camps and for Wescott’s PGA Junior League team. “Coach Gunny” quickly became a favorite of the kids. Perry Green added, “Gunny has also been very persistent in getting me out to play golf on a regular basis. He has made a world of difference as it re-energized my enthusiasm for playing the game. I owe Gunny a lot.” It seems like sometimes the best medicine is having enthusiastic and persistent friends that believe in you and have fun spending time with you.

Each year, the PGA HOPE program puts on a national championship called the Secretary’s Cup. In order to qualify, teams must win their PGA section’s HOPE Cup. Back in 2018, Perry Green put together a special team to play with him to represent Wescott that included Bill, Fred Gutierrez, “Coach” Doug Robertson, and Jesse Duff. In preparation for the event, the team would play together at least once a week in the event’s captain’s choice format.  It was during those weekly rounds that the team cemented their bonds of friendship and became a team that would be extremely tough to beat.

The Carolinas Section’s HOPE Cup was held on Veteran’s Day at Pinehurst Resort where the teams faced brutal weather conditions with temperatures in the 30’s and steady rain. On the final hole, Bill made a crucial 15-foot sidehill putt to tie Kiawah Island for first and then won in a scorecard playoff to earn the honor of representing the Carolinas Section in the 2019 Secretary’s Cup the following May at the PGA Championship. In the spring, the team traveled to New York City to compete for the national championship at Bethpage but the weather felt more like the winter as it was again extremely cold and damp. In the difficult conditions, Team Wescott lapped the field winning by two shots to claim the national championship. The team may not have had the best players in the field but they had the most FUN and they were the best-prepared team. For the victory, each member of the team received a Star-Spangled Banner Blue Blazer. They all felt like they had just won the Masters.

During the past year, Bill along with Fred Gutierrez has taken on the additional role of representing PGA HOPE Charleston as PGA HOPE continues to grow in the Carolinas and Coastal Georgia area and they have been asked to assist in standing up new chapters at Parris Island, Myrtle Beach, and Dublin, Georgia.

Bill adds, “I’m five years clean now and I credit my faith in God, my wife Milissa, my good friends Perry Green and Rich O’Brien, my brother Fred Gutierrez, and PGA HOPE for saving my life.”

Now, Bill is one of those showing other Veterans how they can learn how to save their own lives.

For More Information on PGA HOPE:Individuals interested in joining the PGA HOPE Charleston Program as a participant, coach, or volunteer should contact Rich O’Brien at richobriengolf@gmail.com.