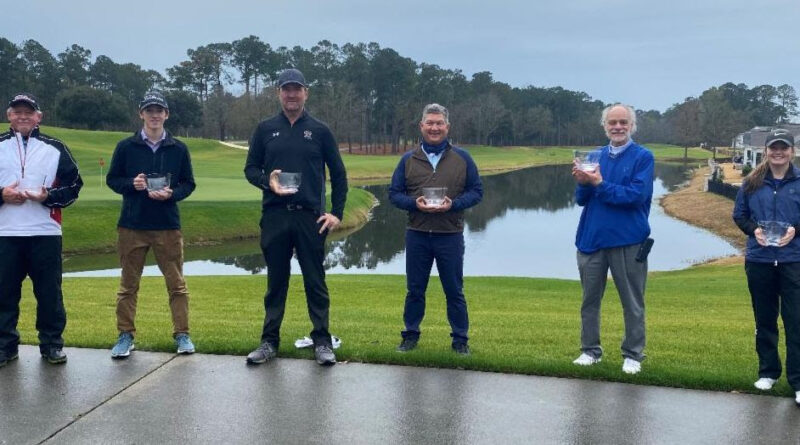 The forecast for the final round was not a promising one but the field of 88 champions from across the state gathered together to brave the elements for the final round of the 25th Annual Tournament of Champions. Before the final round began, each nine would be stipulated with the foreseen weather outlook, with hopes of getting at least a 27-hole event for all divisions, should 18 holes not be possible in the final round.
As mother nature moved in with heavy rains and wind, she ultimately decided the fate of the Tournament of Champions after groups were pulled off the course as rain pushed the course to an unplayable state. The Men’s Club Champion Division, Senior Club Champion Division, and One Day Gross Division were able to complete 27 holes while the Senior One Day Division, One Day Net Division, and Ladies Division were not able to fully complete a stipulated nine, forcing their first round scores to be the official total.
In the Men’s Club Champion Division, Adam Hunt (Columbia) won by one shot over Jason Steiner (Fort Mill) after a 27-hole total of 106. In the Senior Club Division, Jack Brown (Laurens) was victorious after a 27-hole total 110. John Obrien (Columbia) captured the One Day Gross Division after a 27-hole total of 110. Gary Odom (Greenwood) was victorious in the Senior One Day Division with an 18-hole total of two over par 74. Dennis Guerriero (Lexington) won the One Day Net Division with an 18-hole net total of 74. In the Women’s Division, Sydney Roberts (Chesnee) shot a three under par 69 in the first round to take the title.
For more information including detailed scoring, pairings, and results – Tournament of Champions
The Tournament of Champions was played over the TPC Myrtle Beach layout in Murrells Inlet, S.C. The field consisted of 88 men & women Club and One Day tournament Champions throughout South Carolina. The Tournament of Champions is one of 21 Major Championships conducted by the South Carolina Golf Association and is in its 25th year of existence.
The SCGA, founded in 1929, is the governing body for amateur golf in South Carolina. As a non-profit organization, the SCGA’s purpose is to promote, preserve and serve the game of golf. Made up of more than 270 member clubs and more than 50,000 individual members, the SCGA annually conducts 21 SCGA statewide championships, 59 one-day contests, eight USGA qualifiers, seven 40-plus tournaments and six special events. Other Member services offered include GHIN – the USGA Handicap Computation System, Golf Genius Tournament Management Software System and support, Rules of Golf and Handicap education, USGA Course/Slope Ratings and Course measuring, Amateur Status information, the Palmetto Golfer Magazine and the SC Golf Hall of Fame. The SCGA also houses the offices of the SC Junior Golf Foundation and SC Junior Golf Association in a combined effort to support junior golf and grow the game’s initiatives.